Skills, Abilities, and Memory in The Borderlands

For the three of four readers of this blog, you have seen, over the years, many attempts at settling on a comprehensive system to implement skills in my home D&D game. This is another shot at getting it right. I am sure, at least for now, that this is the final implementation of a skill/talent/ability system in my D&D game. I have waffled back and forth from using a system like that found in MERP, which has varying degrees of success and failure, using a more granular system with rolling six-siders and pips (like in WEG Star Wars 2e and LoTFP), and a simple system which relies on rolling d20s with a saving-throw like mechanic (Gavin Norman's BX Warrior and Rogue supplements). All of these systems have given me inspiration and have worked well at my table.


I am moving my game in a direction which requires a splitting of skills, or whatever you call them, into 2 categories. I am splitting them into two categories, one is still called skills and the other will be called abilities. Abilities will often be further identified as either racial, class, or special... but in any case they are all abilities and are all treated in a similar manner.

SKILLS:
Skills is the term am using to define more mundane activities: climbing, swimming, brewing, etc. These are simpler activities. Some of them are available only to members of certain classes, while others are open to members of all classes. e.g. A Thief/Rogue and a Fighter/Warrior might both be trained climbers and trackers, while only a Thief/Rogue is permitted to train at picking locks and disabling mechanical devices (i.e. traps). I am using a d20 saving-throw type roll to resolve skills. Rolling higher is always better. An unmodified roll of "1" is always a catastrophic failure of some sort while unmodified roll of "20" is always a total and complete success. I am using this table, the Action Throw Table - below- (thanks GG), to determine success and failure. It includes adjustments for levels and ability scores. 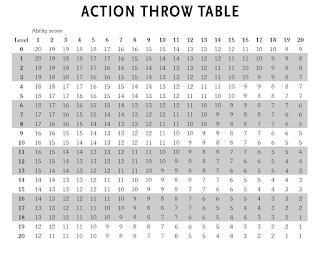 ABILITIES:
Abilities (racial, class, etc.) is the term I am using to define activities which are more consequential; they often have a mystical or magical taint to them. Some good examples of abilities are a cantrips (very simple spells) a Magic-User employs or the ability to identify, make, and safely employ  poisons. Another good example is the ability to conduct alchemical research and to create alchemical bombs and potions... corrosive, exploding acid bombs can be pretty awesome! By nature of the uncommonness and mystical nature of these abilities and their greater, explosive (sometimes!) impacts on the game, I want there to be a granular, level-like advancement system system within a system. To be considered trained in a skill, a character gets an "x" in six chance of success (we will roll d6s). An initially trained character starts with one pip and can invest in more training as s/he advances. A character may never have more pips in an ability than their level plus two (i.e a third level Magic-User may never have more than three pips in any of his/her Cantrips). Additionally, many abilities will bring additional effects which they can produce as they are bumped ip from pip to pip. These may include increased range or duration or additional recipes, for an Alchemist, etc.

UP NEXT:
I will follow with a post re: Memory Pool; I will link it in the body of this post. That post will go in depth re: Memory Pool and how will be used in my games. I still owe a pretty big post, or series of posts, defining Alignment and Cosmology in The Borderlands. I also plan on working up a post defining spell casting in my games.

Posted by Christian Kolbe at 11:11 PM